History of the Patterns

Scrum patterns evolved from earlier work on organizational patterns and particularly from the book [4] by James (“Cope” or “Jim”) Coplien and Neil Harrison and published in July 2004. That book built on a long legacy of patterns of organizational form, the most noteworthy of which may be Kroeber’s classic anthropology texts, [9]. The Organizational Patterns book also built on several earlier publications by the same authors dating back to 1993. Ikujiro Nonaka [10] notes that the early publication of these works at a pattern conference was a development intermediary to his work and Scrum, and Jeff Sutherland — the co-creator of Scrum — has repeatedly pointed out the role that the patterns played as one of the inputs to early Scrum. [11] There have been Scrum patterns as long as there have been organizational patterns (certainly as regards the works of the past 25 years), and this book gives them a proper framing and suitably named ties to the Scrum framework.

It started with a group that would come to be known as The Hillside Group, which launched the software pattern discipline at its first meeting in Colorado in August, 1993. The group was inspired by the 1960s and 1970s work of a building architect, Christopher Alexander, on the theory of design. Alexander’s many books (e.g., [2], [3], [5], [6], [7], [8]) were the primary inspiration for the use of the pattern form in the software community and are the main foundation of late-20th century pattern design theory. The Hillside Group brought this thinking into the software community. The Scrum patterns that evolved into this book would strive to retain the central tenets of Alexandrian patterns such as generativity, pattern languages, emergence, and the centrality of geometry and form, in addition to being a way of presenting expert knowledge.

Organizational patterns were there from the beginning of the software patterns efforts: However, they were certainly a minority effort and the larger pattern community, which was writing patterns of computer code, viewed them with skepticism. Jim Coplien wrote up Developing in Pairs in November of 1993 after a discussion with Paul Chisholm and Ward Cunningham, where they discovered three independently “invented” uses — a key criterion for being a pattern. And a year later in August 1994, the organizational patterns appeared in draft at the first PLoP® (Pattern Languages of Programs) conference in Allerton Park, Illinois. A refined and expanded version of these patterns was published in the first PLoP book [12] in May 1995. Neil Harrison joined the research effort and he and Cope continued to refine the work, refining and adding patterns along the way. Steve Berczuk would publish an early work that explored the relationship between organizational structure and software development in 1996 ([13], pp. 521-528), and in the meantime, Jeff Sutherland, Mike Beedle and others extended the original organizational patterns with additional ones, offering the entire combination as a “Scrum pattern” collection at the 1998 patterns conference (see [14], pp. 637-651). Wiley published Organizational Patterns of Agile Software Development in July 2004, which was based largely on the work of Coplien and Harrison but which also reflected contributions from Alistair Cockburn, Ward Cunningham, Bruce Whitenack, and Steve Berczuk.

At this session Cope socialized a Scrum Pattern Language based on Organizational Patterns that he had put together a few weeks earlier: 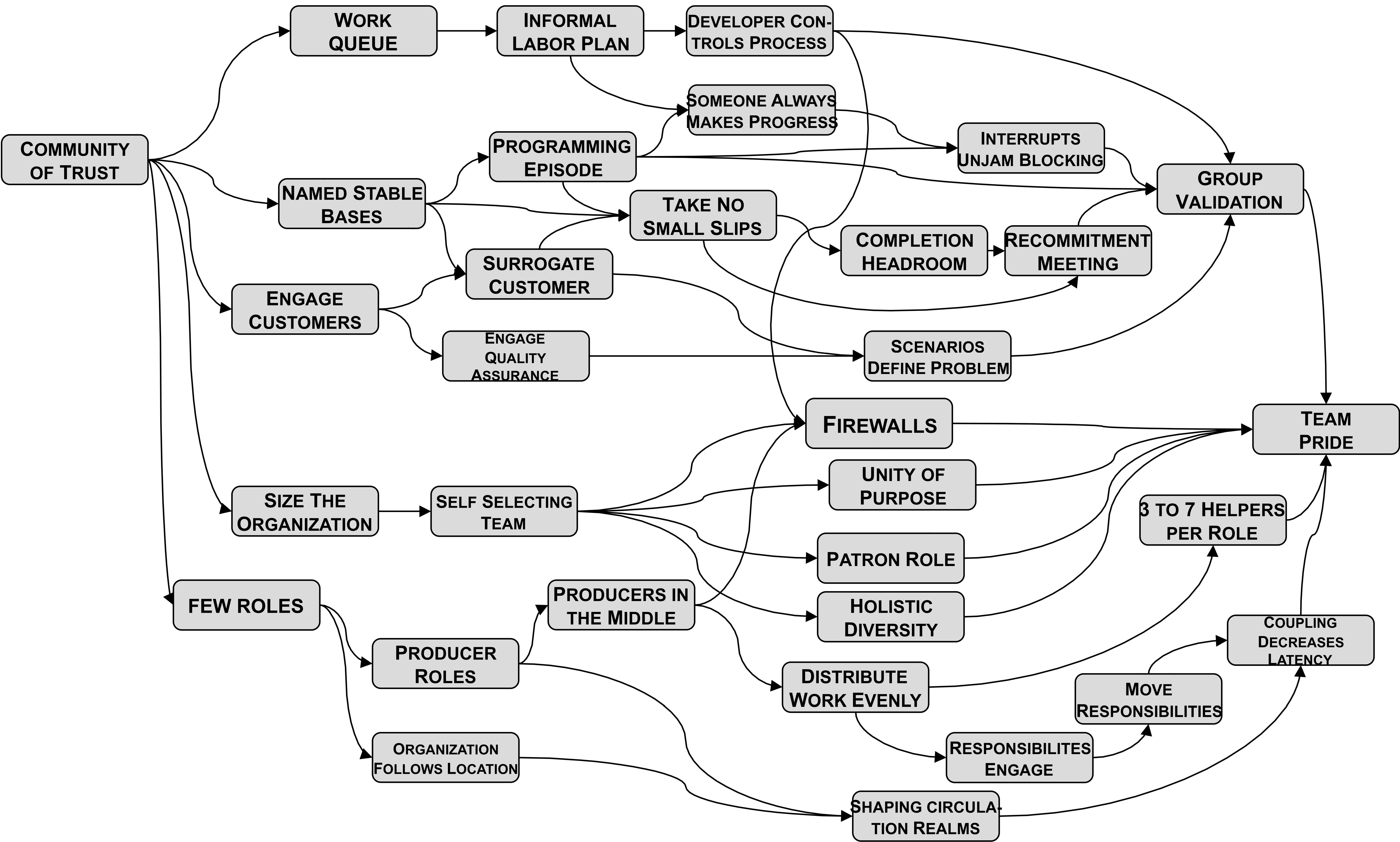 A Scrum Pattern Language based on Organizational Patterns, from 3 March, 2008. [15]

On April 21, 2009 Cope, Gertrud and Jens gathered again at Stora Nyteboda to create a course about “Scrum and Organizational Patterns.” During this 4-day workshop the group came to ask itself, “Why don’t we write patterns for Scrum? Patterns would fit very well with a framework.” Things moved quickly and the group reserved the venue for the first Scrum PLoP about a year hence. In August 2009, many of Scrum PLoP folks first attended Viking PLoP, where there were two Scrum pattern sessions (also in Stora Nyteboda): Gabriella Benefield, Jens, Cope, Gertrud, Dina Friis, Veli-Pekka Eloranta, and Ville Reijonen. And finally, on May 16-19, 2010, the first Scrum PLoP was held at, again, Stora Nyteboda, with eight “registered” participants (Jens Østergaard, James Coplien, Gertrud Bjørnvig, Ademar Aguiar, Lachlan Heasman, Mike Beedle, Jeff Sutherland, Neil Harrison, and Gabrielle Benefield) and four event volunteers (Dina Friis, Christine Hegarty, Espen Suenson, and Mette Jaquet) who participated part-time. By August the first Scrum PLoP web site was up and running. Jeff, Mike, Gertrud, Veli-Pekka and Cope followed up with a mini-PLoP at the Øredev conference in Malmö, Sweden, in November of that same year.

The group added a few more members over the next year, and during the first four days of May 2011, the Scrum PLoPpers gathered to hold their annual workshop at Helenekilde Badehotel in Tisvildeleje, Denmark, which would continue to be the group’s home for three more years.

This group posted a mission statement for the conference in July 2011:

Alistair Cockburn describes software development as a cooperative game. Scrum provides one set of rules for one such way of playing the game. The Scrum Guide is the official rulebook. However, the Scrum Guide doesn’t tell you the rationale behind Scrum as a whole, or behind many of its successful practices. Those rationales come out of experience, community, and the insights of its founders and inventors. The Scrum PLoP mission is to build a body of pattern literature around those communities, describing those insights, so we can easily share them with the Scrum and Agile communities.

On 25 March, 2013 on the Isle of Man, Gertrud, Cope, Dina and Jens together wrote a vision statement for the patterns:

First, to provide a rationalized and authoritative description of Scrum with particular respect to its origins and to those committed to furthering both our understanding and practice of these ideals.

Second, to articulate the world of work with systems thinking. The current tradition of organizational thinking tends to focus on organizational structure and values rather than just processes.

Jeff made a presentation about his “hyperproductivity” Scrum patterns at Agile 2013 in Nashville, Tennessee.

Starting in 2014 Scrum PloPers held five Scrum blitzes (mini version of a Scrum PloP conference). Four of us together crafted the format of the Scrum blitz in Neil Harrison's kitchen (Utah) in 2014 (see Small Teams). A few members of the community gathered for next blitz in Japan in 2015, followed by two blitzes in Denmark in 2017, and another in Portugal in 2017.

In May 2015 the annual workshop moved to Quinta da Pacheca, a winery hotel in Portugal, which has been the venue for its annual event ever since.

In September 2016 Cesário Ramos, Mark den Hollander, Lachlan Heasman and James Coplien formed an editorial team to accelerate the publication of the patterns in A Scrum Book using the “blitz” approach. This small sub-team shaped the patterns by doing editorial work, giving the patterns a place in the pattern languages and distilling the patterns into sketches (drawn by Esther Vervloed) — because “if you can’t draw a picture of it, it’s not a pattern” as Alexander instructs us ([2], p. 267).